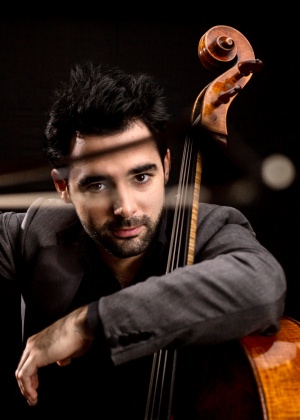 Prizewinner at the XV International Tchaikovsky Competition and SONY Classical exclusive artist, Pablo Ferrández announces himself as a musician of stature. A captivating performer, “Ferrández has the lot: technique, mettle, spirit, authority as a soloist, expressivity and charm” (El Pais).
In March 2021 he released his debut album under SONY Classical, “Reflections”, work that reflects his musical roots and the unexpected similarities between the Russian and Spanish musical at the beginning of the 20th century, which has been highly acclaimed by the critics, and earned him the Opus Klassik Award 2021 in the category of “Young Artist of the Year”.
Recent highlights include the debuts at the Hollywood Bowl with Los Angeles Philharmonic under G.Dudamel, with Bayersichen Rundfunk Symphony Orchestra under D. Gatti, performances of Brahms Double Concerto and Beethoven Triple Concerto with Anne-Sophie Mutter, and appearances with the London Philharmonic, Israel Philharmonic, Rotterdam Philharmonic, Vienna Symphony, and Orchestre National de France, among others.
The 21/22 season will bring the debuts with the Santa Cecilia Orchestra, Czech Philharmonic, Seoul Philharmonic, Royal Philharmonic Orchestra, and returns with Basel Symphony, RTE National Orchestra, Filarmonica Arturo Toscanini, Borusan Philharmonic, Spanish National Orchestra, among others. He will also appear with the Youth Russian National Orchestra under Gustavo Dudamel, performing Beethoven Triple Concerto alongside Anne-Sophie Mutter and Daniil Trifonov, celebrating the 200th anniversary of the Tchaikovsky Hall, as well as at Carnegie Hall performing chamber music with Anne-Sophie Mutter.
Pablo Ferrández will tour with the Academy of St. Martin in the Fields in Germany and Netherlands and with the Barcelona Symphony in Scandinavia. He will also be the Artist in Residence of the Valencia Orchestra.
As a recitalist and chamber musician, Pablo frequently collaborates with such artists as Anne-Sophie Mutter, Vadim Repin, Martha Argerich, Denis Kozhukhin, Gidon Kremer, Yuja Wang, Nikolay Lugansky, Beatrice Rana, Maxim Rysanov, Ray Chen, Alice Sara Ott, Elena Bashkirova, Luis del Valle and Sara Ferrández.
Born in Madrid in 1991, in a family of musicians, Pablo Ferrández joined the prestigious Escuela Superior de Música Reina Sofía when he was 13 to study with Natalia Shakhovskaya. After that he completed his studies at the Kronberg Academy with Frans Helmerson and became scholar of the Anne-Sophie Mutter Foundation.
Mr. Ferrández plays the Stradivarius “Lord Aylesford” (1696) thanks to the Nippon Music Foundation.